Neurofilaments are of clinical interest because they accumulate abnormally in many toxic neuropathies such as those caused by certain organic solvents and their metabolites, and also in neurodegenerative diseases such as amyotrophic lateral sclerosis (Lou Gehrig’s disease), Charcot-Marie-Tooth (CMT) disease, hereditary spastic paraplegia, Alzheimer’s disease and giant axonal neuropathy. These accumulations are thought to be deleterious to axonal health and physiology, and thus may cause or contribute to neuronal degeneration.

Of particular interest is Charcot-Marie-Tooth disease, which is one of the most common inherited neurological disorders and affects approximately 1 in 2500 people in the United States. Also known as distal hereditary sensory and motor neuropathy (dHSMN), Charcot-Marie-Tooth disease is a progressive neuropathy that preferentially affects the nerves that innervate the muscles and sense organs in the limbs. Patients first experience weakness and muscle atrophy in the feet and lower legs, progressing later to the hands and arms. The symptoms often first appear in adolescence or early adulthood. Though not fatal, the disease can be painful and severely debilitating.

The genetic cause of Charcot-Marie-Tooth disease is complex. Disease-causing mutations have been identified in more than 30 different genes. Intriguingly, one of these genes is neurofilament protein L, one of the subunit proteins of neurofilaments. Mutations in this protein cause Charcot-Marie-Tooth disease Type 2E (CMT2E). The effect of these mutations on neurofilaments and the mechanism by which they cause disease is not known, but experiments in cultured cells have suggested that the mutations disrupt neurofilament assembly. We are currently investigating this hypothesis. 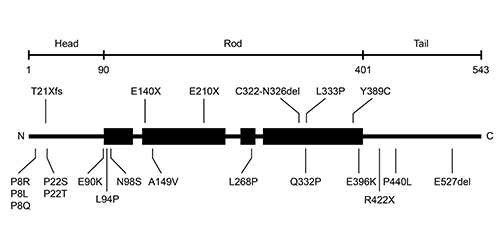