Neurofilaments are the intermediate filaments of nerve cells, and one of three classes of cytoskeletal polymers that comprise the nerve cell cytoskeleton. They have a complex protein composition that varies depending on the nerve cell type and stage of development. Five different neurofilament proteins are present in mammals: the low, medium and high molecular mass neurofilament triplet proteins (NFL, NFM and NFH, respectively), as well as internexin and peripherin. These proteins can coassemble promiscuously in various combinations depending on their level of expression, with no fixed stoichiometry. In mature myelinated axons in the central and peripheral nervous systems, neurofilaments are composed of NFL, NFM, NFH and internexin, whereas in the peripheral nervous system they may also contain peripherin.

Like all intermediate filament proteins, neurofilament proteins all share a common alpha-helical rod-shaped domain that assembles to form the backbone of the filament, flanked by variable amino and carboxy-terminal domains that regulate polymer assembly and interactions. The basic subunit is thought to be a heterotetramer usually composed of NFL and one or more of the other proteins but the pathway of assembly and the precise molecular structure of the assembled filament are still not fully understood.

The polymer backbone of neurofilaments measures about 10 nm in diameter, but the effective diameter of these polymers is approximately 40-60 nm due to the long carboxy-terminal domains of NFM and NFH, which extend outward to form radial projections called side-arms. These highly charged, unstructured and thermally flailing polypeptide chains form an entropic molecular brush that defines a zone of exclusion around the polymer backbone, maximizing the space-filling properties of the polymers by spacing them apart from each other and from other polymers and organelles. 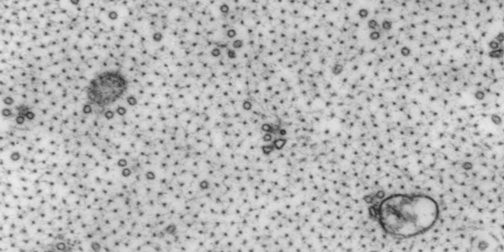 Electron micrograph of an axon packed with neurofilaments, transverse section