The cytoskeleton of nerve cells

The cytoskeleton is a dynamic scaffold inside all eukaryotic cells that is responsible for cell shape and motility as well as the transport and organization of intracellular components. The cytoskeleton is composed of three classes of protein polymers called microtubules, microfilaments and intermediate filaments, each formed by the self-association of protein subunits. Though just nanometers in diameter, the polymers can be many micrometers in length, allowing them to integrate intracellular space. The ability of these polymers to bear mechanical tension and compression allows them to form and stabilize cellular architecture and generate cell movements, and their long length allows them to serve as tracks for the movement of intracellular cargoes.

The cytoskeleton is critical for the shape and physiology of nerve cells and also forms specialized structures such as growth cones, which are responsible for axon elongation and guidance during development, synaptic boutons and dendritic spines, which form the structural basis for nerve cell communication and higher order processes such as learning and memory, and membrane specializations such as axon initial segments and nodes of Ranvier, which are critical for the initiation and propagation of nerve impulses.

Our main interest is the cytoskeleton of axons, which has a unique organization. Axonal neurofilaments and microtubules, which can exceed 100 µm in length, coalign longitudinally and in parallel, forming a linear overlapping array along the entire process. The microtubules form tracks for long-range anterograde and retrograde movements of axonally transported cargoes whereas the neurofilaments are space-filling structures that function to increase axon caliber. Actin filaments, which are shorter in length, are enriched in the vicinity of microtubules where they may form tracks for tethering or short-range movements of cargoes. Actin filaments are also enriched beneath the plasma membrane where they form regularly spaced circumferential ring-like bundles that may function to support the cylindrical shape of axons. 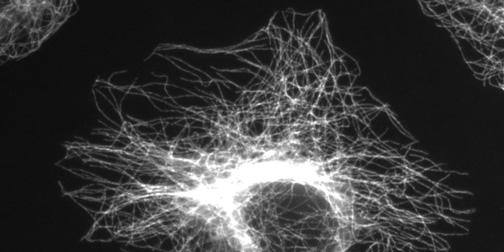 Microtubules in a cultured cell (from https://en.wikipedia.org/wiki/Cytoskeleton)